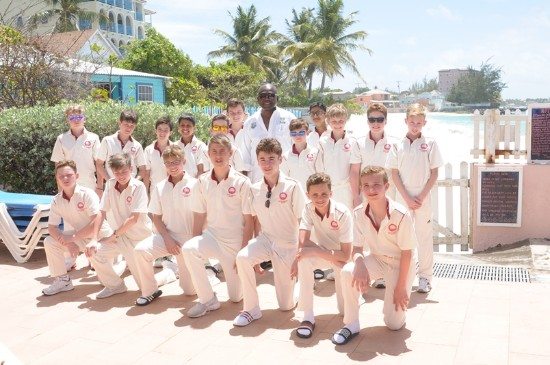 Over the Easter holidays, thirty one Downsend pupils from Year 7 and 8 and seven Downsend staff headed to the paradise island of Barbados for a cricket and netball tour. It was a truly magnificent experience for all. There were thrilling matches, stunning beaches, delicious ice cream and throughout it all, a wonderful group of children who were great fun with whom to share the sports tour.

This was a ten day programme, during which both the cricket and netball teams played five matches each. The sport was highly productive and both the boys and girls enjoyed considerable success.

On the netball side of the trip, Downsend put out two teams, a Year 8 side and a Year 7 side. Through the tour the Downsend girls had to adapt to a greater level of physicality from the Bajan opposition. They did this with aplomb, winning eight of the ten fixtures they played. This was a great achievement considering that our girls were also battling the heat which they certainly weren’t used to after the recent winter! At times the Downsend teams were so strong that they played a versatility format of netball with every player having a chance to play in every position. Despite this we still won these matches, demonstrating the great strength in depth of this group.

Throughout all the games the girls showed sheer grit and determination to succeed. The first set of matches saw the Year 7 team defeated against the strong St Jude’s team, whilst the Year 8 team held the opposition off to a frustrating draw (technically a win for us!). The next two sets of matches saw both teams win convincingly. In the penultimate match of the tour, the Year 8 girls were really challenged by the opposition, in what was an extremely physical game. The final result was a victory to Downsend, with a welcome rain shower to cool us off! The Year 7 team made fantastic progress throughout the tour and it was great to see the development of their netball.

Barbados is a cricket loving nation and the Downsend boys were very lucky to have the opportunity to play at some wonderful grounds and to play against wonderfully enthusiastic opposition. The most pleasing aspect of the tour was the lovely community feeling at each match.

There was a thrilling match against Empire CC, which we won in the final over. Their bowlers were very quick and the batsmen showed great resilience to chase down a large total. There was another ‘edge of your seat’ match against the Good Shepherd School where our bowlers performed brilliantly under pressure to bring home the victory. Against Deighton Griffith School we put in a dominant bowling performance to skittle the opposition. We were delighted with the level of cricket the boys produced through the tour and really enjoyed watching them play.

Away from the sports pitch we were able to enjoy a number of outings on the tour as well. Everyone enjoyed the time spent on the beach, swimming in the Caribbean Sea, playing beach cricket and enjoying ice creams. Then there was the Island Safari in which we were whisked around Barbados in a jeep, which used both conventional roads and some more bumpy tracks, to enjoy some of the wonderful sights. We also enjoyed the catamaran cruise, having the chance to snorkel over the reefs and swim with turtles. Both children and staff definitely enjoyed the opportunity to do some jumping, bombing and diving off the boat after lunch as well.

This was a superb tour and one which all the staff and children enjoyed immensely. The children were great tourists, having fun and showing great independence and maturity throughout. I hope it was an experience that all the children will think of fondly for many years.