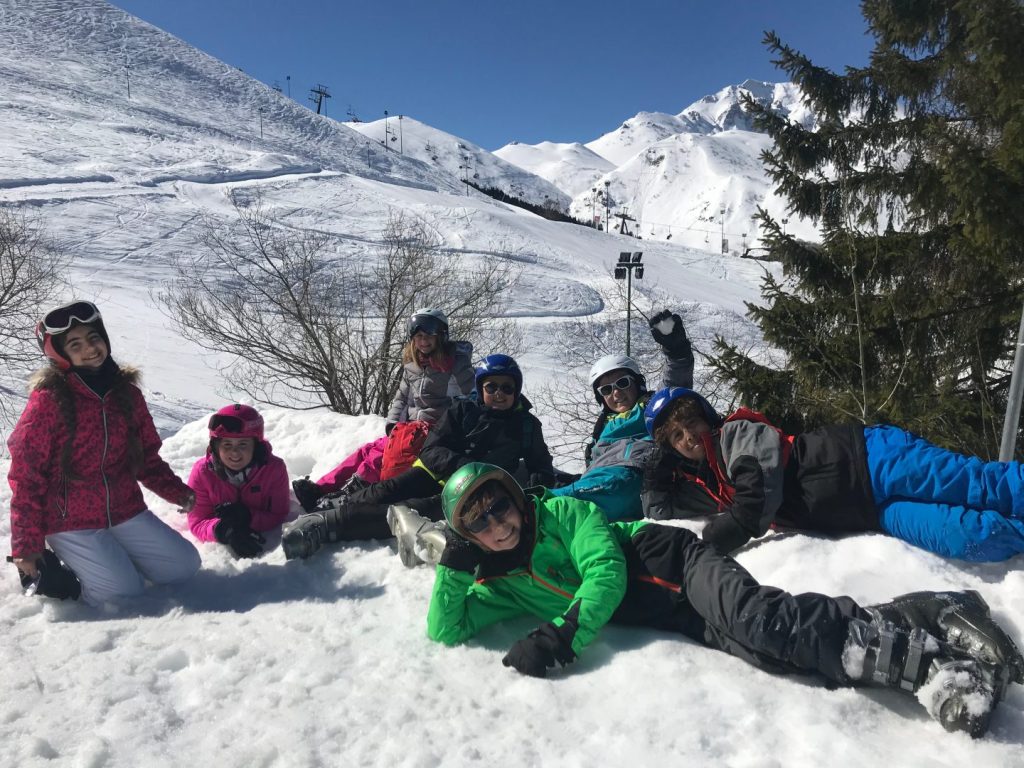 Well the term ‘climate change’ certainly had relevant meaning this year! What a difference a year makes! Where there was mud and grass last year in Prato Nevoso, it was firmly covered by a layer of at least two metres of snow this year. As we rounded the hairpin bends on our way to the village, excitement grew! There was a chance to have a quick view of rooms in Hotel Mondole before ski socks were grabbed and it was off to the ski hire shop for fitting of boots and skis. This was highly organised and a very painless experience as all skis and boots were colour-coded and numbered so it was idiot proof (or so we hoped!)

On our return to the hotel, it was a late dinner, unpacking and then exhausted bodies fell into bed excited for what lay ahead tomorrow! A look outside the window next morning was breath-taking! Untouched, freshly groomed pistes lay reflecting the beautiful morning sun. After a quick breakfast, we all headed into the village to meet with the ski instructors led very professionally by Francesco. After a brief look at abilities, they were sorted into groups and both the Intermediate and Advanced groups headed off on the chair lift up the mountain. Both beginner groups rode the magic carpet for the first time and started to learn the all-important snow-plough! Back to the hotel for a noisy lunch where many hilarious tales of the morning’s shenanigans were told! This was followed by further skiing in the afternoon and a superb quiz written and hosted by our very own Mr Mitchell – and no, the staff didn’t win – it was the Disney round that did us!

The remainder of the week saw the most incredible improvement on the slopes. The beginner groups started to ride the chair lifts in search of more difficult slopes and the intermediate and advanced groups had huge amounts of fun off-piste and finding lots of jumps both in and out of the snow park! There were meals to be had in mountain huts, a coach to the neighbouring Artesina saw many ride a button drag lift for the first time and a lovely lunch was had in Hotel Margueris before returning back to Prato. The jester’s hat of last year was replaced by the Mohican hat this year for the numpty of the day! This was taken home by Bijou for her James Bond style ‘ride’ up the button lift face-first!

Due to the fabulous snow this year, evening activities were great fun. The snow-tubing where we were taken up a multi-coloured magic carpet to several slopes of varying difficulty – of course most of the children went for the almost vertical slope – was a favourite and was topped off by a delicious crepe. Karaoke night involved most of the children and fun was had by all, especially joining in with Jake and Warren and their Alpaca ‘song’! A pizza evening in the famous Malanotte at the top of the mountain with the most incredible views also included an opportunity to hit the dance floor. Our dancing queen this year was most definitely Nastia. The highlight of the evening entertainment had to be the night skiing on the final night in resort. All groups had fun skiing, jumping and going through the woods under the floodlights. This was followed by a presentation by the ski school, in a mountain hut, to all the children who received not only medals this year, but also the ski school’s 50th Anniversary buffs. Whether it was a snow plough turn that was mastered or a jump or some fun in the powder, all the children should feel very proud of the challenges they faced and overcame!

It was a pleasure to be trip leader on this trip and I was extremely proud of the children’s achievements, perseverance, manners and team spirit! I wish next year’s trip good luck and I hope that many of our skiers will return to the slopes for yet more fun!