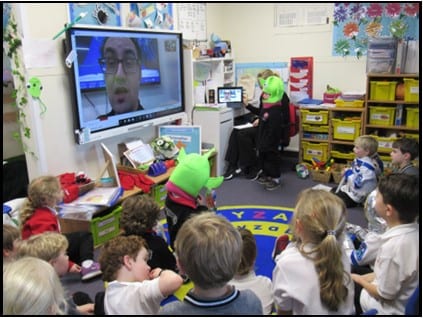 Reception and Year One had an amazing afternoon communicating with American rocket Engineer – Steve Ringler, who has been working on the NASA space project. Steve was part of the engineering team who built the space shuttle Endeavour and was given the opportunity to be in the control room at the launch. He proudly spoke about his involvement of being part of building and launching the satellite ‘Juno’, which is currently orbiting Jupiter. The children had prepared questions to ask Steve, some written by themselves! They asked—How fast does a space shuttle travel? What fuel does it need? and Are there any aliens out there? The children also learned what satellites are used for and how long they are in orbit for  – (Up to 15 years). The children waved a United States flag dressed in either alien or astronaut costumes and showed Steve their junk modelling rockets. At the end of the interview, the children sang their planets song to show their knowledge of the order of the planets in a ‘Planet Rap’.